It is great to find a retailer of cheap Warhammer Miniatures. The flagship games from Games Workshop, Warhammer 40,000 and Warhammer Age Of Sigmar / Warhammer Fantasy Battle which have been running since 1983. 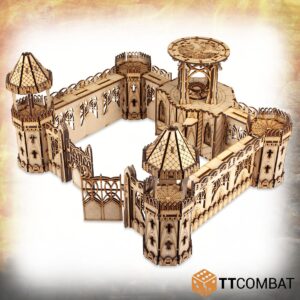 Looking for cheap miniatures purist will stick with the original Games Workshop miniatures, though many use similar looking miniatures like Kings Of War from Mantic Games.

Second hand, classic out of print Warhammer Miniatures can be found here.

Warhammer 40,000 (Warhammer 40K, WH40K or simply 40K) is the scifi version of Warhammer Fantasy. A tabletop miniature wargame produced by Games Workshop, set in a science fantasy universe adapting the orcs elves etc of the WHFB range. Created by Rick Priestley in 1987 Warhammer 40,000 shares game mechanics with WHFB. Expansions for Warhammer 40,000 are released periodically which give rules for urban, planetary siege and large-scale combat. View A Huge Range of 40K models and expansions here

Warhammer’s Age of Sigmar (AoS) was released by Games Workshop in 2015 apparently to replace Warhammer Fantasy Battle (WFB) as the fantasy wargame in their fantasy universe. The last supplements released for the eighth edition of WFB centred on the End Times which led to the almost total destruction of the Warhammer world and the death of most of the world’s population. This leads into the Age of Sigmar with the return of the long-lost founder of the human empire worshipped as a god. View A Huge Range of AoS models and expansions here

Save Money On Other Games Workshop Games.