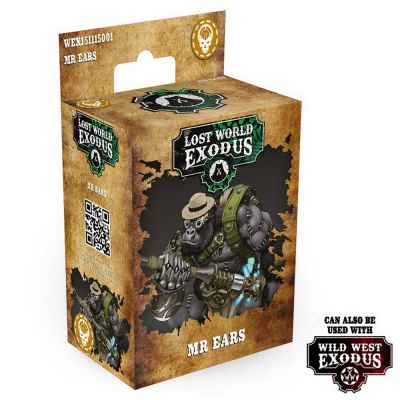 Associate members of the Covenant of the Enlightened do not enjoy the respect or prestige that Covenant Peers do, but they are often the ones who do most of the leg work. In order to be officially recognised as an associate of a Peer, an individual will have to put in hours of thankless research and errand running for their sponsoring Peer. Of course like all who are drawn to the Enlightened, being in possession of a keen mind and a drive to push the boundaries of human understanding is a prerequisite. But associates often lack the opportunity or financial means to secure an actual Peerage in the Covenant.

Girauld Eres was one such associate, a Parisian naturalist who had developed into a minor celebrity as he toured Paris society with his collection of primates. Girauld’s real passion lay in animal physiology and his personal menagerie was home to some impressive specimens. Showing a talent for specimen capture, he was approached by Warick Hudson and earned a sponsorship into the Covenant as an associate following his collaboration on the spectral containment technology with Hudson and Katherine Holst.

The night of his accident, Eres was working in his laboratory on a skin healing accelerant that went horribly wrong. When the beaker exploded, the chemicals that sprayed over him were not yet mixed correctly and began to eat away at his flesh. Fortunately Eres had been playing host the evening before to Xavier Bichat, an elderly Enlightened Peer. When Bichat was brought back to the house, it was already too late. Girauld’s skin had already been flensed from a large part of his body. Fortunately, Bichat was a keen study of the restricted galvanic arts, having reanimated a simian construct just the previous evening for Girauld’s entertainment. With a very little time remaining Xavier was forced to use that same construct to hold Eres’ brain.

The process was rushed and Xavier’s knowledge of the techniques involved were far from extensive. As a result Eres retained very little motor function in his new body and so, staggering like a victim of a massive stroke or palsy, Eres was conveyed by sea to Countess Augusta Byron in the Union of Federated States. The journey brought him close to death and his brain would not survive the trauma of a second transplant, so Girauld had little choice but to submit to a number of surgical procedures by the Countess that allowed him to regain greater control of the body, with the exception of his left arm. That was rectified by a prosthetic that gave Girauld significantly increased strength to further augment the exceptional size of his primate body..

Although Girauld was grateful to still be alive it would be impossible to return to Parisian society in his new form. He therefore spent some time in the Badlands of the Union, where open spaces away from others were plentiful. One advantage of having the body of a 700lb gorilla was a vastly increased strength. Girauld was a sickly child and life as an academic did nothing to increase his vitality so the change was significant. He realised that he could snap small trees, lift large rocks and even hurl a man bodily more than 30 feet through the air. He discovered that last fact when a group of American hunters mistook him for a trophy animal.

It was while in the Badlands during the Atlas Affair that the outlaw Jim Petersen gave him the nickname of Mr Ears. So extraordinary were the circumstances of their adventure together that the name was quickly adopted in the local press and a year later when President Johnson awarded them both the inaugural Presidential Medal of Freedom, it was presented in the name of Mr Ears.

With a new found sense of purpose, Mr Ears joined with Warwick Hudson and the rest of the ‘Soul Hunters’ on their expedition to Antarctica. Armed with the wrangling tools he developed during the Atlas Affair, Mr Ears is determined to study the reported megafauna discovered in the Lost World and create a new menagerie of wonders to show to the world.

Miniature is supplied unpainted and some assembly will be required.

Character Unit Cards are not included and can be found on the Lost World Exodus website.